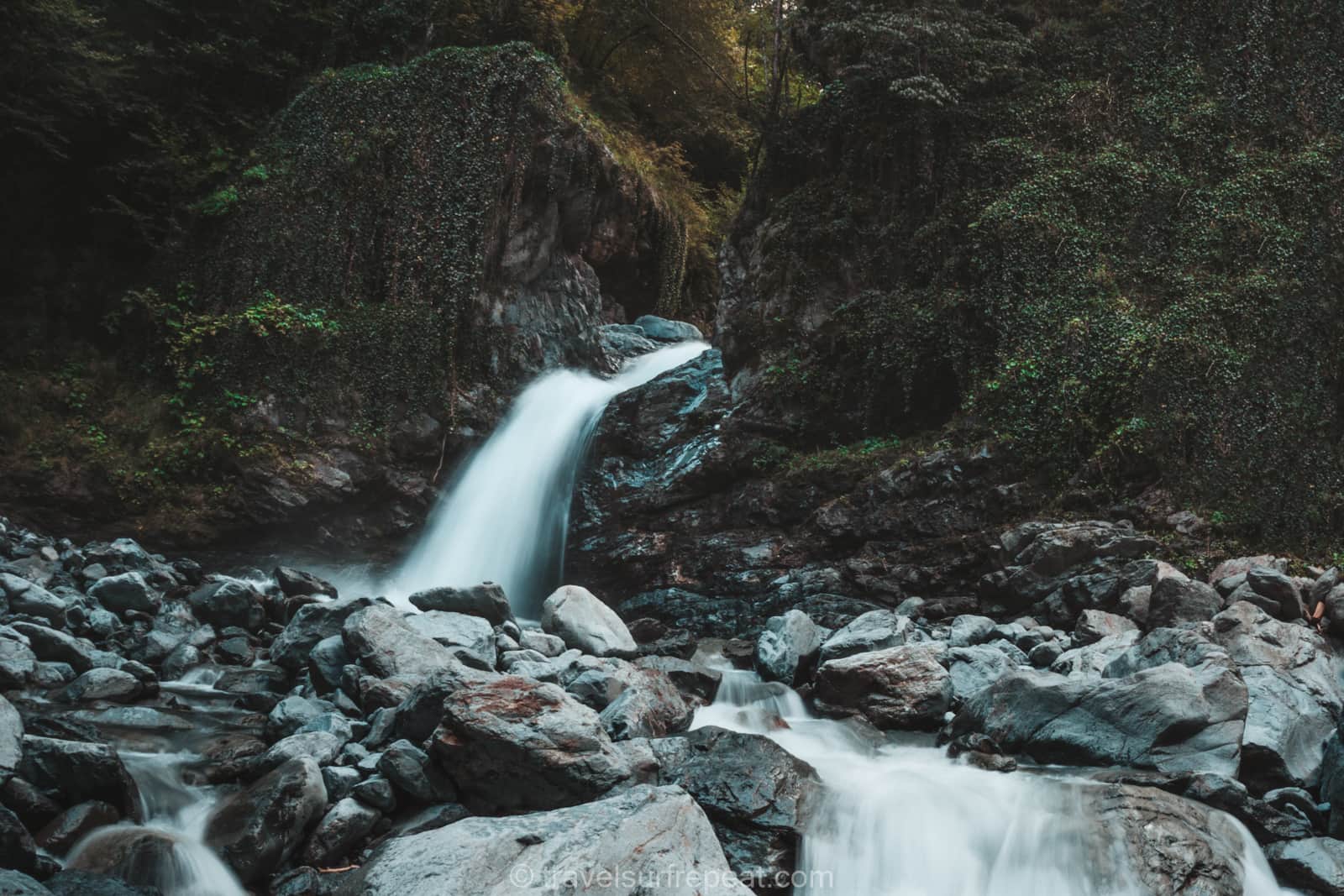 The town of Lagodekhi is located in Kakheti – the eastern part of Georgia – on the edge of the Lagodekhi Protected Areas and near the border with Azerbaijan. It's easily reachable from Tbilisi by marshrutkas, and most people visit Lagodekhi for its preserved nature and hiking activities. You can easily hike to two waterfalls in Lagodekhi – Ninoskhevi and Black Grouse.

If you decide to hike to Black Rock Lake (a three-day long hike), you should be able to see some other waterfall, but I don't know where exactly, its name, or if it's possible to walk there since I didn't hike this trail. You can ask about this at the Lagodekhi Protected Areas visitors center (197 Vashlovani St., Lagodekhi).

You will find all of the mentioned places on the map at the end of this post.

Ninoskhevi Waterfall is 40 meters high waterfall that pours down into a watering hole and its power offers a refreshing shower. You can take a dip in the main pool under the waterfall, but it's better to use one of the smaller pools below.

The waterfall is named after the Ninoskhevi river on which is located, and it's also called Gurgeniani Waterfall after the nearest village. Locals also call it Great or Big Waterfall.

How to get to Ninoskhevi Waterfall

To get to Ninoskhevi Waterfall, you need to get to the village of Khizabavra (right after Gurgeniani village), where the trail to Ninoskhevi waterfall starts. The best way to get there is in a rented car or by taxi from Lagodekhi. A taxi shouldn't be expensive, I'd say around 10 or 15 GEL one way. If you are coming by car, there is a free parking lot next to the starting point of the trail. You can of course also walk from Lagodekhi, but it's more than 10 km just to the village.

There is no entrance fee or opening time, so you can go whenever you want to.

The whole hike to the waterfall and back takes 4 to 6 hours, and it depends on the conditions of the trail. It took us around 3 hours to get to Ninoskhevi waterfall because the trail wasn't in perfect conditions after heavy rains. There was only one wooden bridge across the river at the beginning and later we had to cross the river on our own several times – nothing dangerous or challenging though.

You can't get lost on the way since you follow the river in its riverbed or the trail in the forest, but often you have to choose your own path.

If you are using Google Maps, be aware that there are three spots for this waterfall and two of them are wrong. The one closest to the village is just the start of the trail, the middle one is the correct one, and the farthest one is also misplaced. Use my map below to get the exact location of the waterfall.

If you want to camp at Ninoskhevi Waterfall, you can. One spot is below the waterfall on the right side of the river (I hope you know how to determine the side of a river). If you continue upstream, there should be another place for camping on the left side of the river. Unfortunately, the first spot was full of trash – plastic bags, bottles, rotten food, or a tarp. You can also camp near the parking lot.

Black Grouse Waterfall is a much smaller waterfall with a height of 6 meters, but still a very beautiful one with nice surroundings. You can easily take a dip in the pool because the waterfall is not so powerful here.

Black Grouse means Rocho in Georgian, that's why you can find two names for this waterfall.

How to get to Black Grouse Waterfall

The hike to Black Grouse Waterfall starts in the town of Lagodekhi, right next to the Lagodekhi Protected Areas visitors center. This trail is well marked, and it took me less than 2 hours to reach the waterfall. You will cross the Shromiskhevi River a few times even though there are some bridges. Most of the time you walk through the forest next to the river, so the terrain is easier than the one to Ninoskhevi Waterfall. The final part of the trail is quite steep and narrow in some places, but easily doable with a little caution.

There is also no entrance fee neither opening time.

At the waterfall, there is no suitable spot for camping because there are only stones and rocks. But in the last part of the trail, you will pass a place with a sign that should do the job. In Lagodekhi, you can camp in Ocho camp.

How to get from Tbilisi to Lagodekhi

The cheapest way to get from Tbilisi to Lagodekhi is by marshrutka. Marshrutkas depart from the Isani metro station in Tbilisi every one or two hours between 7:40 and 18:15. It costs 7 GEL, and the journey takes two and a half hours.

We passed through Signagi, so if you are looking for transportation from Signagi to Lagodekhi, you can easily do it.

For the journey from Tbilisi, I paid straight to the driver and on the way back I bought a ticket at the bus station in Lagodekhi.

Where to stay in Lagodekhi

I stayed at Lagodekhi Woods Guest House, and I can't recommend this place highly enough! It's very close to the Lagodekhi Protected Areas visitors center and approximately 20 minutes by walking from the bus station. The accommodation is a private room with a bathroom and a kitchen, and you can also relax in their green garden. The family lives in the house next to your place, is super hospitable, and I had one of my best times in Georgia with them.

Because Lagodekhi is a popular area for travelers, you will find lots of accommodations in Lagodekhi.

From restaurants in Lagodekhi, I can recommend Dzveli Sakhli, Wald Hotel Lagodekhi, or Royal Palace. There is also Nikora Supermarket on the main road.

Map of places in Lagodekhi

P.S. Keep it clean! There are no trash bins along the trail so keep your trash! Trash bins are located at the start of both trails. Sadly, there is a lot of garbage around the trail. You can do something good for your only planet and bring a part of it back with you. Thanks! 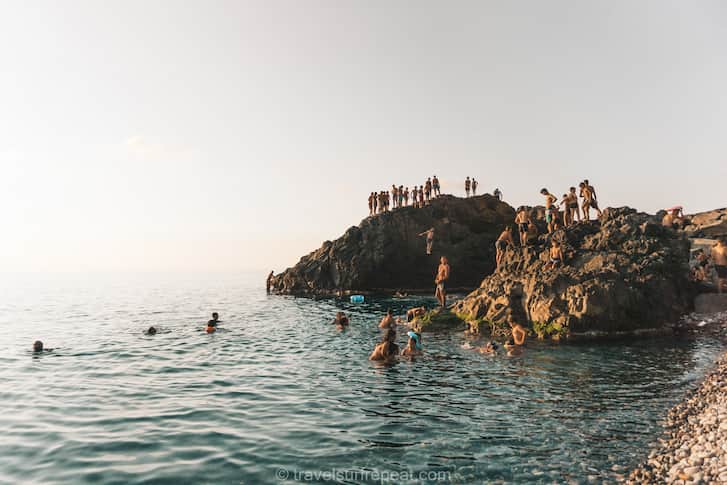 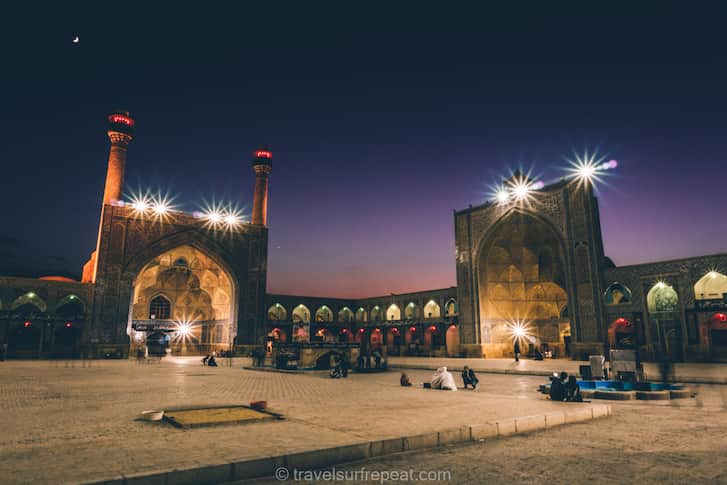 Is Yazd the most beautiful city in Iran? 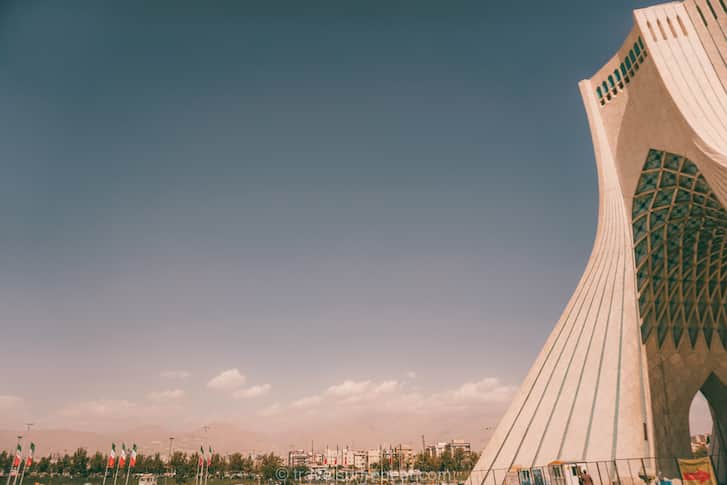 To Iran without a plan
I'm using cookies 🍪
May I use cookies to see how my website is doing, and to work with third-party services?
Manage options Manage services Manage vendors Read more about these purposes
Let me set it up ⚙️
{title} {title} {title}